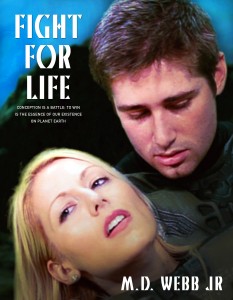 He sold real estate in Virginia, Texas and Georgia.  Return to education in Georgia where he received a Master Degree in Administration in Supervision and Education in 1993.

During 2010, Melvin Produced his first short film “Prove Me” that tackled poverty in the United States and discussed solutions the could decrease the cycle the causes poverty.

“Fight For Life” is his first story to be published.  It’s a Romantic Galactic Sci-Fi that focuses on conception.  The story is told in two dimensions, the Outer World (reality) and Inner Space, (inside the body), inside Michael.  Michael has the burden of trying to impregnate his wife Lisa. What he doesn’t know is Captain Gameta, Michael’s chief sperm ultimately has the responsibility to get at least on soldier inside Planet Ovaria. This story is unusual because it’s told from the sperms point of view.

The inspiration for such a story took place in Ghana West Africa, a close friend and his wife were having trouble conceiving. The idea of conception from the sperms point of view was created.

Melvin likes to focus on events that happen before our eyes but go unnoticed.

His passion is reading stories that uplift humanity. His hope is to write stories and produce films that give humanity hope. He is fond of saying “The Mission is the Vision”.

He lives in Stone Mountain, Ga where he enjoys writing, reading, producing, traveling, and spending time with his family and grandchildren.

Comments Off on About the Author